The BMW New Class (German: Neue Klasse) was a line of sedans and coupes produced by German automaker BMW between 1962 and 1977. These models ensured BMW's solvency after the company's financial crisis of the 1950s and established the identity of BMW automobiles as sports sedans.

During the 1950s, the BMW line-up consisted of luxury cars with displacements of two litres or greater, economy cars powered by motorcycle engines, and motorcycles. With their luxury cars becoming increasingly outdated and unprofitable and their motorcycles and economy cars becoming less attractive to an increasingly affluent society, BMW needed a car in the 1.5 to 2 litre class to become competitive. Prototypes powered by a 1.6 L engine based on one bank of the BMW OHV V8 engine were built and evaluated without a convincing result.[1]: 130–131

In 1960, Herbert and Harald Quandt invested heavily in BMW, and gained a controlling interest in the company.[1]: 134  That year, the "Neue Klasse" project was begun. Led overall by Fritz Fiedler, the project had Eberhard Wolff in charge of chassis design, Wilhelm Hofmeister in charge of styling and body engineering, and Alex von Falkenhausen in charge of engine design.[1]: 136  The team was to produce a new car with a new engine, which BMW had not done since the 303 in 1933.

The term New Class referred to the 1.5–2–liter class of automobiles from which BMW had been absent since World War II.

The car took over oncoming demand of the Borgward Isabella market,[3] as Borgward disappeared the year before.

The three-box four-door saloon was in many ways conventional, using a unitary structure and MacPherson strut front suspension which were becoming mainstream by the time of the 1500s introduction.[4] Less conventional was the independent rear suspension, which featured coil springs and semi-trailing wishbones pivoted from a stout cross beam that also supported the differential housing.[4] While BMW was using MacPherson struts for their first time on the New Class, they had used unit body construction on the 700 and semi-trailing arm rear suspension on the 600 and the 700.[1]: 137 [2]: 62  All New Class cars had front disc brakes.

The M10 overhead camshaft engine used in the New Class was required to displace 1.5 L initially, with the possibility to be expanded to 1.8 L. Von Falkenhausen had earlier designed an engine prototype for possible use in the BMW 700 and used this as a starting point for the M10.[1]: 136 [2]: 62  The engine was canted over at 30 degrees to the right of vertical in order to allow for the low bonnet line, which also contributed to the styling of the car.[4] 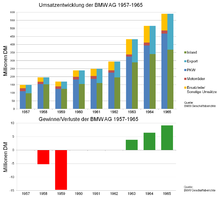 In the years preceding the New Class's 1962 release, BMW had recorded many operating losses. In 1962, the company broke even, with a turnover of 294 million marks. In 1963, sales increased by 47% to 433 million marks, and BMW was able to pay dividends to its shareholders for the first time in 20 years.[2]: 63

Introduced in September 1961 at the Frankfurt Motor Show, the BMW 1500 entered regular production in October 1962 and was manufactured until December 1964.

Contemporary reports praised the all-round visibility and the commanding driving position while recording that it was necessary to lean forward a little to engage first and third gears due to the long travel distance of the gear lever.[8] The large 40 cm tall luggage compartment was also commended.[8]

The 1500 could accelerate to 100 km/h (62 mph) in approximately 15 seconds.[8] The performance was at the time considered lively in view of the engine size, and although the engine needed to be worked hard in order to achieve rapid progress, it ran smoothly even at speeds above 6,000 rpm.[8] The firm suspension and correspondingly harsh ride surprised those conditioned by the BMW 501 to anticipate a more comfort-oriented suspension setup.[8]

Notable problems that developed with the 1500 included separation of the semi-trailing arm mounts from the body, rear axle failure, and gearbox problems. These were resolved in later versions of the New Class sedan.[2]: 64

An automatic transmission option was introduced in 1966 and in 1967 the 1800 was generally updated along with the 2000. The updates included interior changes (a modernized dashboard design and simpler door panels) as well as styling changes to the front grilles.[citation needed] 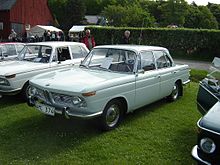 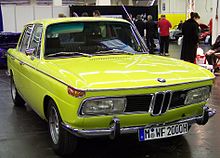 Intended as an upscale version of the 1800, the 2000 featured distinct wide taillights, more exterior trim, and unique rectangular headlights. The American market 2000 sedans could not have the rectangular headlights due to government regulations. A different grille with two individual round headlights, similar to the design that BMW later used in the 2500 sedan, was offered in the US. The 2000TI retained the '1800' taillights and headlights.[citation needed] A more luxurious 2000TI-lux (later "tilux") featured the sporty TI engine with a more high-grade interior and accessories,[1]: 143  including a wood dashboard and optional leather seats.

In a 1967 test, Road & Track felt that the 2000 sedan was "the best performing 2-liter sedan in today's market and the best handling and best riding as well."[citation needed]

Note that not all models are included.

In 1972 BMW developed its first electric car based on the 1602 model. The BMW 1602 Elektro-Antrieb was first unveiled at the 1972 Olympic Games in Munich, Germany; two examples were used to shuttle VIPs and serve as support cars in various long-distance events like the marathon.[11]

The New Class coupé was introduced just after the 3200CS coupé was discontinued.[2]: 66–67  The styling was based on the New Class sedan, with an all-new front end.[1]: 141 [2]: 66–67  The headlights were behind a glass fairing, and the grill consisted solely of a chromed BMW "double-kidney" at the centre of the front. Apart from chrome accents around the headlights and along the top of the front end, the rest of the front was painted metal, with a row of vertical slots behind the bumper on each side to admit air for cooling and engine induction.[1]: 145 [13] Reactions to the front end styling have been mixed; Norbye describes it as "a blunt, unattractive front end",[1]: 141  Severson agrees, calling the front clip "odd-looking" and stating that the details of the front end "do no favors for the looks",[13] while Noakes disagrees, referring to its "imposing front end" being "tidier than the Bertone body's fussy nose" in comparison to the 3200CS.[2]: 66–67 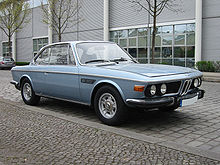 In 1968, the New Class coupés were replaced by the six-cylinder New Six CS (E9) models, which have a longer wheelbase and longer front clip to accommodate the M30 engine. The front end styling was also modified to resemble that of the New Six (E3) sedans.[1]: 168

At the Paris Motor Show in 1968, BMW displayed a concept vehicle called the 2000ti Coupe, a coupe designed by Pietro Frua of the Glas car company (which BMW had taken over two years earlier).[14][15] The 2000ti did not reach production.

The "02 Series" range of two-door sedans, coupes and convertibles began production in 1966, and was based on a shortened version of the New Class Sedan platform.