Felice Mario Boano (Turin 1903 –– Turin 8 May 1989) was an Italian automobile designer and coachbuilder.

He worked for Stabilimenti Farina in Turin before joining Pinin Farina in 1930.

In 1954 he founded Carrozzeria Boano in Grugliasco with his son Gian Paolo Boano (born 1930) who also had been with him while at Ghia. They took over some of the initial Ferrari 250 GT Coupé production from Pinin Farina. After only three years, Boano closed, and his son-in-law Ezio Ellena took over the remaining 50 units of 250 GT production in his Carrozzeria Ellena (1957–1966).[1]

Starting in 1957, Boano worked under Dante Giacosa for Fiat in their Turin styling department, creating the Fiat 600 and the square style of Simca 1000. His son Gian Paolo Boano (1930–)[2] succeeded him in 1959, as leader of the Centro Stile, Fiats styling department.[3] 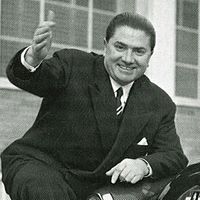