The Fiat 127 is a supermini car produced by Italian car manufacturer FIAT from 1971 to 1983. It was introduced in 1971 as the replacement for the Fiat 850. Production of the 127 in Italy ended in 1983 following the introduction of its replacement, the Fiat Uno.

Developed towards the end of the 1960s, the Fiat 127 was launched as a two-door saloon in April 1971. A three-door hatchback, using an identical body profile but with a full-depth rear door and folding rear seat, was launched the following year; this would prove to be the most popular version of the 127.[2] This was Fiat's first supermini-sized hatchback. The 127 featured a state-of-the-art transverse-engine/front-wheel-drive layout, with the transmission mounted on the end of the engine. Both design ideas had been fully vetted by Fiat, using its Autobianchi subsidiary 1964 Primula, 1969 A112 and A111 — precisely because the models were not targeted for large production. The larger Fiat 128, launched in 1969, was the first Fiat-badged car to use the same transverse powertrain layout. The 127, like the A112, used a shrunken version of the 128 platform, as well as the rugged Fiat OHV 100 series 903 cc engine that had powered the Autobianchi and, with various cylinder capacities, earlier generations of Fiat cars. The 127 also featured a unique transverse leaf spring suspension at the rear. Safety was another area of innovation: the 127 included an articulated steering column and crumple zones for progressive deformation under impact.

The car was one of the first of the modern superminis, and won praise for its use of space (80 percent of the floor space was available for passengers and luggage) as well as its road-holding. It was launched a year before the comparable Renault 5, and before the end of the 1970s most mass market European manufacturers were producing similar cars, including the Ford Fiesta and Volkswagen Polo, while General Motors added a three-door hatchback to the Opel Kadett range, which was reworked for British production and sold as the Vauxhall Chevette. The 127 was also one of the more popular imported cars on the UK market, peaking at more than 20,000 sales in 1978.

It was also the first car fitted with an all-polypropylene bumper on steel support.[3] The 127 was an instant success, winning the European Car of the Year award for 1972, and quickly became one of the best-selling cars in Europe for several years. It was the third Fiat in six years to receive this accolade.

In June 1974, slightly over three years after the model's introduction, Fiat reported that the one millionth 127 had been completed at the Mirafiori plant in Turin, after just over three years in production.[4] The (in its time) hugely successful Fiat 600 had taken seven years to reach that same milestone.

The Series 1 car changed little during its lifetime. However, in May 1973 saloons became available in both standard and deluxe versions. In 1975 the 127 Special variant was released which featured a restyled front grille and detail changes to the interior. The deluxe version was differentiated by its reclining front seats and opening hinged rear side windows as standard equipment.[2] During the next couple of years the Fiat 850, which had initially been marketed alongside the 127, was withdrawn from most markets.

The Series 2 version of the 127 debuted in May 1977.[6] It featured a restyled front and rear, larger rear side windows (using rear quarter pressings derived from those used on the Brazil market Fiat 147) and the option of the 1049 cc engine - uniquely for the 127 this was the five-bearing OHC "Brazil" 124 series engine from the 147 rather than the Fiat OHC unit from the 128. The tailgate was extended and now reached nearly to the rear bumper, addressing complaints about the high lip over which luggage had to be lifted for loading into the earlier 127 hatchbacks.[5]. The interior was revised with a new dashboard which was identical in layout to the original car but was plainer in appearance and lost the wood embellishment of the Series 1s. The underside of the dashboard was tidied up with new cover panels to enclose the steering column, brake master cylinder (on right hand drive versions) and the pedal mechanisms.

A new Sport model was available from 1978 which featured a high output 70hp version of the standard 1049cc engine. This was achieved by incorporating Abarth revisions to the head with larger valves and an Abarth exhaust system and the use of a twin choke Weber carburetor. Changes were also made to the gearbox final ratio to improve the performance. The Sport model has bespoke high back sporty cloth seats with either blue or orange piping and bespoke racing wing mirrors as well as a rev counter, sports wheels, sports leather steering wheel and sport 3 piece stripe with 127 Sport decals. It was available in 3 colours, Black with orange stripes, Silver with black stripes and Orange with black stripes.

There was also a "high-cube" panel van version, known as the Fiorino which was based on the Series 2 bodyshell, and this remained in production until 1984, when a new Uno-based Fiorino debuted.

Despite a completely new replacement being only a year away, the Series 3 was launched in Italy in January 1982 and soon reached other European markets. It is distinguishable from the Series 2 by its grille. The 3rd series received a completely new dashboard design and interior, following the design language first seen in the Ritmo. Body panels are all as before, except for a longer bonnet required to clear the larger headlights. The 1301 cc Fiat SOHC engine was also introduced as an option for the Series 3. New for the Series 3 was the option of a five-speed manual transmission, a first for the 127 as it had not fit in earlier models. It was available in the 1050 Super (called "Comfort" in some markets) and was also installed in the 127 Sport.[7]

In nations like Norway, Denmark and Finland it was particularly successful.

The 127 was replaced as Fiat's high volume product in this sector by the Fiat Uno in January 1983, though versions manufactured in South America continued in production till 1995: Fiat imported the South American 127 Unificata to Europe, until 1987, only for left-hand drive markets. The 127 disappeared from the right-hand drive British market soon after the Uno went on sale there in June 1983.

As happened with other Fiat models of that era, SEAT made a Spanish version of this car called the SEAT 127. Due to SEAT design policy, a 4-door variant of the car was also produced, as well as a later five-door version. SEAT also produced a unique variant of the 127 OHV engine. This had 1010 cc instead of 903 cc and produced 50 bhp (37 kW; 51 PS). The four-door SEAT 127 was exported to certain markets with Fiat badging.

When their licence from Fiat expired, SEAT redesigned some parts of the car and created the SEAT Fura Dos. Some design parts of this model were also used in the Ibiza mark 1. SEAT produced 1,238,166 units of the 127 between 1972 and 1984. 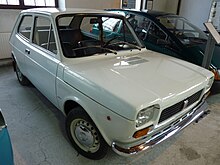 Fiat 127 was also produced under Fiat license by Polish automobile manufacturers FSO (between 1973 and 1975) and FSM (between 1974 and 1975) under the name Polski Fiat 127p. These were assembled using both Italian and Polish parts. Originally the Polski Fiat 127p was to be produced in large numbers as a people's car, but when it became apparent that it would be about 30% more expensive than the 126p it was decided to concentrate on the latter while the larger 127p was only produced in very small numbers.[8][9]

In Brazil the car was known as the Fiat 147 (later Spazio), a three-door station wagon version called "Panorama". There was also a conventional two-door three-box saloon available, "Fiat Oggi", a pick-up called "City" and a van called "Fiorino" was also produced there. The Brazilian-built versions utilized a 1050 cc engine and a 1300 cc engine called "Fiasa" and also utilized a 1.3 L Diesel engine (for export markets only). From 1981 this variant (called a 127) was exported to Europe, to be sold alongside the 127 sedans and hatchbacks. A total of 1,169,312 units were built from 9 July 1976 to the end of 1986 in Brazil and 232,807 units were also built in Argentina between 1982 and 1996, as the Fiat 147, Spazio, and Vivace. It was also assembled in the CCA in Colombia.

Although the car achieved reasonable[clarification needed] selling figures, the model was titled as "low-level" and "not so reliable" by early buyers, because Fiat was just starting to sell cars in Brazil in the late 1970s and early 1980s. It was the first model produced by FIAT in Brazil, in 1976.

Italian coachbuilder Moretti made a canvas-topped version in the style of the Renault Rodeo and Citroën Méhari called the "Midimaxi" (to set it apart from the smaller, 126-based Minimaxi). In spite of its rugged appearance, the front-wheel drive underpinnings remained the same. The Midimaxi was first shown at the 1971 Turin Motor Show, which was also when the very similar Fissore 127 Scout first appeared.[10]