During the 1960s, '70s and '80s, many units were built in countries such as Spain (as SEAT 600), where it became the icon of the Spanish miracle, Argentina, where it was nicknamed Fitito (a diminutive of FIAT) and former Yugoslavia where it was nicknamed Fića or Fićo (pronounced [fee-cha] and [fee-cho] respectively). Much of the 1974's SEAT / Fiat 133 platform can even be traced back to the Fiat 600.

Codenamed Progetto 100 ("Project 100"), the Fiat 600 mirrored the layout of the Volkswagen Beetle and Renault 4CV of its era. Aimed at being an economical but capable vehicle, its design parameters stipulated a weight of around 450 kg with the ability to carry 4 people and luggage with a cruising speed of no less than 85 km/h. A total of 5 prototypes were built between 1952 and 1954, which all differed from each other. Chassis number 000001 with engine number 000002 is believed to be the sole remaining example, according to a recent report by Quattroruote's "Ruoteclassiche" vintage division. It was powered by an innovative single-cam V2-cylinder engine designed to simplify maintenance and did not feature a clutch pedal. At the official launch in 1955, FIAT engineer, Dante Giacosa declared that the aim had been to create something new, both in the interest of progress and simplification. This prototype, however, did not become the chosen design.[7]

The car had hydraulic drum brakes on all four wheels. Suspension was a single double-mounted leafspring—which acts as a stabilizer—between the front wheels coupled to gas-charged shock absorbers, and an independent coil-over-shock absorber setup coupled to semi-trailing arms at the rear. All 600 models had 3-synchro (no synchro on 1st) 4-speed transaxles. Unlike the Volkswagen Beetle or Fiat 500, the Fiat 600 is water-cooled with an ample cabin heater and, while cooling is generally adequate, for high-power modified versions a front-mounted radiator or oil cooler is needed to complement the rear-mounted radiator. All models of the 600 had generators with mechanical external regulators. 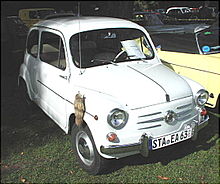 A year after its debut, in 1956, a soft-top version was introduced, as well as a six-seater variant—the Fiat 600 Multipla. It was a precursor of current multi-purpose vehicles.

The millionth 600 was produced in February 1961, less than six years after the car's launch.[8] At the time when the millionth car was produced, the manufacturer reported it was producing the car at the then remarkable rate of 1,000 a day.[8] As of mid 2017 there were 78 registered as taxed for road use in the UK and 44 registered as SORN (Statutory Off Road Notification).[9] 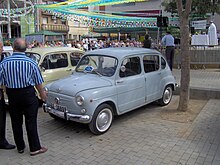 In Spain, the 600 model was made under the make of SEAT, from 1957 to 1973. Up to 797,319 SEAT 600 were made. The Spanish car maker exported them to a number of countries worldwide. This car motorised Spain after the Spanish Civil War.

SEAT produced various derivatives of the original 600 model some of them with improvements and special fittings like the use of "suicide doors": the SEAT 600 D/E/L Especial version, the 'Descapotable' cabriolet and the 'Formicheta' commercial version etc.

The most interesting version produced between 1964 and 1967 by SEAT is the SEAT 800, the sole four-door derivative of the 600 model which received a longer wheelbase. It was developed in-house by SEAT and produced exclusively by the Spanish car maker without any equivalent model in Fiat's range. 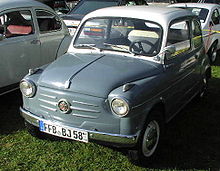 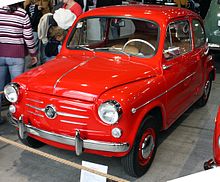 In former Yugoslavia the model was much sought after, and was produced under the name Zastava 750 (later 850), nicknamed "Fića" or "Fićo" in Serbo-Croatian, "Fičo" or "Fičko" in Slovene, and "Фиќо/Фичо" (Fikjo/Ficho) in Macedonian. It was produced by the Zastava factory in Kragujevac, Serbia, from the early 1955 until 1985, during which time it played a major role in motorisation of the country, due to its affordability. 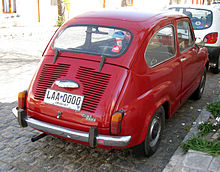 The 600 was built as the Fiat 600 R by Sevel in Argentina from 1960 to 1982, with assembly operations also taking place (beginning somewhat later) in Uruguay by Ayax S.A., and in Chile.[10] At first, Someca S.A. built the 600 with rear-hinged doors and the 633 cc engine (28 hp), mainly from parts shipped in from Italy. As a new plant was constructed in the Ferreyra, a suburb of Córdoba, the local parts content steadily increased. In 1962 the 600D was introduced, with a 32 hp (SAE) 767 cc engine. In August 1964, around the same time that the local firm changed its name to Fiat Concord S.A., the second 600D was introduced, with slight changes to its appearance. The suicide doors continued to be used until the April 1965 appearance of the 600E, which also gained some extra power. Early in 1967 the 600E received a slight facelift with bigger headlights, new rims, and a new "grille" in front.[11]

In November 1970 the 600R appeared. The external differences were limited to trim, but the interior saw more thorough changes, with a new steering wheel, inner ceiling, and seat coverings. The hubcaps were replaced with tiny rubber caps. The 767 cc 36 hp (SAE) 600 R (thanks to higher compression than the E) was in turn replaced by the 32 hp (DIN) 843 cc (65.0 x 63.5 mm) 600 S in July 1977,[11] a version featuring new bumpers with rubber overriders and a black plastic faux-grille to replace the previous chrome iteration. This version was equipped with an 850 cc engine that could use 88 octane fuel. That engine was adapted in Córdoba from the 933cc engine (93 octanes fuel) which equipped the Fiat 133, originated in Spain which coexisted with 600S until 1982. Top speed was up to 120 km/h in 600S. The 600 was finally replaced by the Fiat 147 in April 1982, which at beginning also used the 933cc engine., after having undergone one last tiny facelift in 1981 (black head and taillight surrounds, a black "shield" up front).[11]

In Colombia, it was assembled in the Mazda motor plant of Colombia, Compañía Colombiana Automotriz from 1979 to 1982 with 60% Colombian parts and 40% Serbian parts (from the Zastava 750). Marketed as the Fiat 750Z, colloquially it was called the "topolino".

The Fiat 600 Multipla was a four-door MPV based on the Fiat 600's drivetrain and Fiat 1100 front suspensions, that sat up to six people in a footprint just 50 cm (19.7 in) longer than the original Mini Cooper and on the same 2 m (78.7 in) wheelbase as the 600 saloon. This had been achieved by moving the driver's compartment forward over the front axle, effectively eliminating the boot but giving the body a very minivan-like "one-box", flat-front look. The car debuted at the Brussels Motor Show in January 1956,[14] and was discontinued in the spring of 1967 to be replaced by the Fiat 850 Familiare. The Multipla name was reintroduced in late 1998 for the Fiat Multipla compact minivan.

The 600 Multipla was available in three interior configurations: 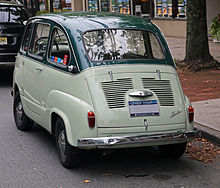 As mentioned, the 600 Multipla used the type 100.000 663 cc overhead valve inline-four cylinder engine from the 600 saloon, producing 21.5 DIN-rated PS (15.8 kW; 21.2 hp) or 24.5 CUNA-rated PS[17] at 4,600 rpm.[18] A shorter final drive ratio was the only change made to the 4-speed manual transmission, with synchromesh on the top three forward gears. Rear trailing arm suspension also came from the 600, while the front double wishbone suspension—complete with coil springs, coaxial hydraulic dampers and anti-roll bar—as well as steering components were sourced from the bigger 1100/103. Other changes included a larger capacity radiator and relocating the fuel tank (which on the regular 600 was housed in the front luggage compartment) to the rear, above the gearbox. The spare wheel was carried inside the cabin, in front of the passenger seat.[14] The manufacturer advertised a top speed of 90 km/h (56 mph).[15]

In 1956, Fissore designed an open-topped Multipla prototype called the "Marinella" with a wooden-slat wraparound bench in the rear. 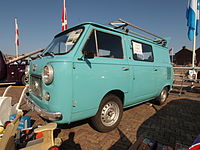 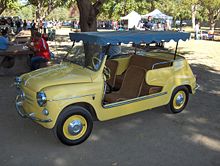 In 1958 Fiat shipped a number of Fiat 600s to the Italian design house Ghia for conversion into the Jolly. Featuring wicker seats and the option of a fringed top to shield its occupants from the Mediterranean sun, these cars were originally made for use on large yachts of the wealthy (Aristotle Onassis owned one).

The car was designed as a luxury vehicle for wealthy Europeans and the US market.

With a cost of nearly double that of a standard "600", they were made in a very limited production. It is believed that fewer than 100 exist today, each one being unique. 32 Jolly cars were used as taxis on the island of Catalina off the coast of Los Angeles in the US from 1958 to 1962. Famous Fiat Jolly owners include Aristotle Onassis, Yul Brynner, Grace Kelly, Mary Pickford, Mae West, Gianni Agnelli, Josip Broz Tito and James Inglis. Fiat Jollys are highly sought after by collectors; however, replicas are being made and are being passed off as authentic. A genuine 1960 Fiat Jolly "600" model brought a record price of $170,500 at a collector car auction in Scottsdale, Arizona, in January 2015. 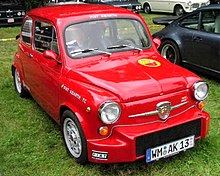 Italian tuning company Abarth produced various versions of the Fiat 600 from 1956 to 1970 under a variety of model names, including Abarth 210 A, Fiat-Abarth 750, 850, and 1000. Many suffixes like Granturismo, Berlina, TC, and TCR were also used and many were built with aluminium bodywork by Zagato and other famed Italian carrozzerie.

Abarth competitor Giannini Automobili also produced tuned 600s (as did countless other, smaller modifiers), most famously the Giannini 750 TV, but these never had the impact that Abarth's versions did.