Its technical design was an evolution of the successful Fiat 600. The internal name for the Fiat 600 development project was "Project 100" and consequently, the internal Fiat codename for the 850 project was 100G (G was a follow on of model designations for the 600 which ran from A to F). The engine of the 850 was based on that of the Fiat 600, but had its capacity increased to 843 cc. The 850 came in two versions: "normale" (standard) with 34 hp (25 kW) and engine code 100G.000 and "super" with 37 hp (28 kW) and engine code 100G.002. The maximum speed was approximately 125 km/h (78 mph). While it was not a large step forward in technical development, it possessed a certain charm with its large rolling eyes and its short tail, in which the engine sat.

The 850 Familiare continued in production till 1976 long after the saloon version of the 850 had been replaced by the Fiat 127. In 1976 the Fiat 900T was introduced, retaining most of the body panels of the 850 Familiare, but featuring the 903 cc engine from the Fiat 127 (although, in this application, still mounted behind the rear axle): the 900T benefited from significant enhancements in 1980, being now renamed 900E. At least in the UK the 900 series camper vans were badged as FIAT Amigo. Production stopped in 1985.

At the time of their introduction into the United States the Sedan, Coupé and Spider were marketed with a reduced capacity, high compression 817 cc (50 cu in) engine in order to beat US emissions regulations at the time which applied only to engines equal to or larger than 50 cubic inches. Compression was raised from 8.8:1 to 9.2:1, requiring premium octane fuel.

In order to separate the sportier variants Coupé and Spider from the basic version, apart from the increase of engine performance, the equipment was also extended and adapted to the higher expectations. Both received sport seats, a sport steering wheel and round speedometer; Spider even received a completely rearranged instrument panel. The front drum brakes were replaced with disc brakes, although drum brakes remained on the rear wheels.

In 1968, Fiat revised the successful Spider and Coupé again and gave them an even stronger engine with 903 cc and 52 hp (39 kW). They were called Sport Spider (engine code 100GBS.000) and Sport Coupé (engine code 100GBC.000). The Sport Spider body stayed essentially the same, but with a restyled front. The headlamps were moved forward slightly and the glass covers were eliminated giving the car a "frog-eye" look, and the original flush front turn indicators were replaced with units hung below the bumper. Several limited special edition versions of the Spider were offered, including the Racer featuring a body-colored metal hard top and the Racer Berlinetta featuring a black vinyl hard top.

There was a minivan and transporter model as a successor of the world's first minivan, Fiat 600 Multipla, which was later renamed to 900T and likewise received the larger capacity of 903 cc.

Production of the Coupés ended in 1971, of the sedan in 1972, and of the Spiders in 1973, after altogether nearly 2.3 million models were sold worldwide, 140,000 of which were Spiders.[9] Under the name SEAT 850, it was however further produced for some years in Spain, also in a four-door variant. As a successor the Fiat 127 was brought to the market in 1971 which combined the 903 cc push-rod OHV engine with the FIAT 128 transmission and suspension components in a fashionable fast- and later hatch-back 2-door sedan.

Spanish manufacturer SEAT also built the 850 into the 1970s. They also offered a four-door saloon derivative in two different iterations. The Fiat 850 was also produced under the name Pirin-Fiat in Lovech, Bulgaria, on the basis of complete knock down (CKD) kits between 1967 and 1971.[11] 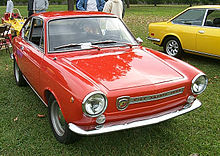 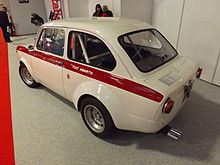 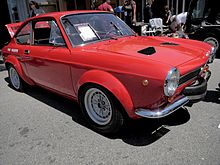 Abarth produced several tuned versions of the Berlina, Coupé, and Spider, with ever-increasing displacements. These belonged to the OT series of Abarth cars—standing for Omologata Turismo or "touring homologated", which also included two-seater sports racing cars.[12]

At the 1965 Turin Motor Show Bertone showed on its stand a one-off OTR 1000 berlinetta, based on the 850 Spider but with a fixed roof and a front radiator opening.[12] Suffering the competition of less expensive and less complex OT models, production of the OTR 1000 ended with the arrival of the restyled 850 Coupé in 1968.[12]

Italian coachbuilder designed and built a small sports car with fastback coupé body based on the 850, the 1968 Francis Lombardi Grand Prix. The car was also marketed by OTAS as the OTAS 820, equipped with Giannini engines, and in an Abarth version, the Abarth Scorpione.

The Michelotti Shellette was a beach car based on the 850, styled and built by Giovanni Michelotti. Designed in the mould of Ghia's 500 and 600-based "Jolly", it was a more useful proposition, being faster and better equipped. Only about 80 were built, with some of the early ones using DAF underpinnings. The Shellette had the more powerful 47 PS (35 kW) engine of the Special/Coupé.[16] 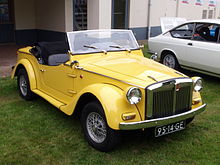 The Siata Spring was a 2-seater roadster built by Siata on the basis of the 850. Introduced in 1967, it featured retro styling with a mock upright radiator grille, separate wings and headlights, and running boards.[17] In Italy it was initially priced at 795,000 Lire, 255 thousand Lire cheaper than Fiat's Bertone 850 Spider.[18] Top speed was 125 km/h (78 mph).