On August 9, 2010, Volkswagen Group subsidiary Audi’s subsidiary Lamborghini acquired 90.1% of the shares of Italdesign Giugiaro S.p.A, including the brand name rights and patents.[1][2] The remaining shares were sold to Audi on 28 June 2015, with Giorgetto Giugiaro resigning from the firm at the same time.[10]

Volkswagen and Italdesign have a history of working together that dates back to the early 1970s.[2]

Former Volkswagen AG Chairman Ferdinand Piëch apprenticed at Italdesign during the summer of 1972, learning about engineering and design.[11] Italdesign is responsible for the design of several notable Volkswagen vehicles including the first generation Volkswagen Golf (1974), Volkswagen Scirocco (1974) and Volkswagen Passat (1973) and the Audi 80 (1974).[12]

In May 2010, Italdesign agreed to transfer 90.1% of its shares to Audi AG subsidiary Lamborghini Holding S.p.A. in order to keep Volkswagen's Italian holdings bundled together. The purchase price was not disclosed. The Giugiaro family retained ownership of the remaining shares. Both Giorgetto Giugiaro and his son, Fabrizio Giugiaro, continued to have active roles in the company.[1][3][8][11] In July 2015 it was announced that Giorgetto Giugiaro had left and sold the remaining shares to Audi AG. 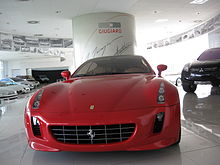 A 2005 Ferrari GG50 ("Giorgetto Giugiaro 50"), marking Giugiaro's 50 years in design. On display in the Italdesign-Giugiaro showroom in Moncalieri, Italy

Following a large-scale cooperation with SEAT - already dating back to the 1980s - Italdesign created a new firm, Diseño Industrial Italdesign Srl, in SEAT's hometown Barcelona, Spain, in 1992 to design and construct models, master models and prototypes for the Spanish manufacturing industry.[13] This subsidiary is known today as Italdesign Giugiaro Barcelona SL.[9][14] In 2017 the company founded a daughter company dedicated to building collector vehicles. Named ITALDESIGN AUTOMOBILI SPECIALI, the new brand will feature on all vehicles constructed in ultra low series production, aimed at a number of selected collectors. The first car to be produced is the Zerouno with a production of only five units.[15]

Cars produced or planned by the new group.

Italdesign acquired ETM (Engineering Technologies Methods), a company founded in 1984 that creates silicone prototypes, allowing the transition from an acrylic prototype to a more refined prototype with characteristics similar to the finished product.[9]

Under Volkswagen Group ownership, Rupert Stadler is the Chairman of the Board and Jörg Astalosch is CEO.[citation needed][18]

Italdesign has been credited for the design of a wide variety of concept and production cars since the firm's founding in 1968.