The Lancia Aurelia is a car produced by Italian manufacturer Lancia from 1950 to the summer of 1958. It is noted for using the first series-production V6 engine. Several body styles were offered: 4-door saloon, 2-door GT coupé (B20), 2-door spider/convertible (B24), and a chassis to be custom bodied by external coachbuilders.

Establishing a post-war Lancia tradition, the car was named after a Roman road: the Via Aurelia, leading from Rome to Pisa.

An Aurelia-based car is now produced by .[1]

The Aurelia was designed under the direction of engineer Vittorio Jano. Its engine, the first production V6 engine, a 60° design developed by Francesco de Virgilio, who was between 1943 and 1948 a Lancia engineer, and who worked under Jano. During production, capacity grew from 1.8 l to 2.5 l. Prototype engines used a bore and stroke of 68 mm x 72 mm for 1,569 cc; these were tested between 1946 and 1948. It was an all-alloy pushrod design with a single camshaft between the cylinder banks. A hemispherical combustion chamber and in-line valves were used. A single Solex or Weber carburettor completed the engine. Some uprated 1,991 cc models were fitted with twin carburettors.

At the rear was an innovative combination transaxle with the gearbox, clutch, differential, and inboard-mounted drum brakes. The front suspension was a sliding pillar design, with rear semi-trailing arms replaced by a de Dion tube in the Fourth series. The Aurelia was also first car to be fitted with radial tires as standard equipment.[2] Initially 165SR400 Michelin X and later on the sports models fitted with 165HR400 Pirelli Cinturato. 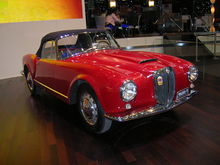 The second series Aurelia coupé pushed power up to 80 hp (60 kW) from the 1991 cc V6 with a higher compression ratio and repositioned valves. Other changes included better brakes and minor styling tweaks, such as chromed bumpers instead of the aluminium ones used in the earlier car. A new dashboard featured two larger instrument gauges. The suspension was unchanged from the first series. A new B22 sedan was released in 1952 with dual Webers and a hotter camshaft for 90 hp (67 kW).

The third series appeared in 1953 with a larger 2451 cc version of the engine. The rear of the car lost the tail fins of the earlier series.

The fourth series introduced the new de Dion tube rear suspension. The engine was changed from white metal bearings to shell bearings. An open car, the B24 Spider, was introduced at this time (1954 to 1955) and was well received. It was similar to the B20 coupé mechanically, with an 8-inch (203 mm) shorter wheelbase than the coupé.

This model was immortalized by Dino Risi's 1962 movie Il Sorpasso ("The Easy Life"), starring Vittorio Gassman. The actual car used for shooting (a single model) was not destroyed during the accident scene sealing the end of the story: an Alfa Romeo Giulietta Spider was used as replacement.

The fifth series coupé, appearing in 1956, was more luxury-oriented. It had a different transaxle (split case), which was more robust and similar to that used in the later Flaminias. The driveshaft was also revised to reduce vibration.

Alongside the fifth series coupés was a revised open car, the B24 convertible. This differed from the earlier B24 Spider, having roll-up windows, better seating position, and a windscreen with vent windows. In mechanical aspects, the B24 convertible was similar to the coupé of the same series.

Power was down to 112 hp (84 kW) for the 1957 sixth series, with increased torque to offset the greater weight of the later car. The sixth series coupés had vent windows, and typically a chrome strip down the bonnet. They were the most touring oriented of the B20 series.

Produced from 1956, second series with many small alterations to the Aurelia Spider. One part chrome bumpers and wider bonnet air-scoop. Cars from this series no longer have panoramic windscreen and now have fixed quarter-lights. 521 cars were built. All had 2,451cc engines. Dashboard features 2 big dials.

The first prototype of the B50 cabriolet was shown at the 1950 Turin Auto Show. Produced in small numbers, around 265 cars, by cabriolet-specialist Pinin Farina, the B50 Cabriolet was a four-seat comfortable cruiser. It is powered by a 1,754cc engine. The majority of the production was done between 1950-1952. Some cars had an improved B52 platform.[4]

In the 1951 Mille Miglia a 2-litre Aurelia, driven by Giovanni Bracco and Umberto Maglioli, finished second, beaten only by a Ferrari 340 America. The same year it took first in class and 12th overall at the 24 Hours of Le Mans. Modified Aurelias took the first three places in the 1952 Targa Florio with Felice Bonetto as the winner and another win on Lièges-Rome-Lièges of 1953. The fifth edition of the Coppa della Toscana netted 1-2-3 victory for the Lancia Aurelia GT 2500 of Scuderia Lancia.[5]

One of the most important wins came in 1954 at the Monte Carlo Rally. An Aurelia GT co-driven by Louis Chiron and Ciro Basadonna took the top step of the podium, which was the first of Lancia’s many overall victories at the legendary rally held on the roads above the principality.[6]

The Lancia Aurelia is featured prominently in The Calculus Affair, one of The Adventures of Tintin, in the story's car chase scene. The car's Italian driver has great pride in Italian cars, which he claims are the best in the world.

Dino Risi's 1962 movie The Easy Life (Il Sorpasso, starring Vittorio Gassmann and Jean-Louis Trintignant, a fine example of the Commedia all'italiana genre) features the Lancia Aurelia, one of the most iconic cars in Italian cinema. It was unusual at that time for a film to be filmed almost entirely in a car and The Easy Life can be considered one of the first road movies. The Lancia Aurelia used was a 1958 B24 Convertible and the driving scenes were very unusually filmed on the road rather than with a projected backdrop.