The Leyland National is an integrally-constructed British step-floor single-decker bus manufactured in large quantities between 1972 and 1985. It was developed as a joint project between two UK nationalised industries – the National Bus Company and British Leyland.[1] Buses were constructed at a specially built factory at the Lillyhall Industrial Estate, Workington. Styling was carried out by the Italian vehicle stylist Giovanni Michelotti, previously commissioned by both Triumph (Herald, TR4, GT6, 2000/2500, 1300, Dolomite and Stag) and Scammell lorries (Routeman GRP cab).

It was intended to replace all the rear-engined single-decker buses offered by British Leyland, including the AEC Swift, Bristol RE, single-deck Daimler Fleetline, Daimler Roadliner and Leyland Panther. 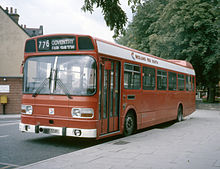 Preserved Westnederland Leyland National with an alternative windscreen model, designed to avoid glare, in The Hague in September 2002

The Leyland National was built with integral, modular construction and a rear engine. All components were designed for ease of construction and replacement. Until 1978, it was always built with a roof mounted pod at the rear, housing the heating equipment, which consequently blew warm air out at roof level. At first the pod was almost the length of a bay and appeared designed to give a Trans-Atlantic feel. In 1976 a new shorter version of the roof pod was introduced along with the battery being relocated to the front under the cab. The Leyland National was available in three lengths, the majority being 10.3 metres (33'9") and 11.3 metres (37'). It was easy to spot the longer ones as its main side windows were all the same length, on the shorter models the windows were shorter except for one in the middle (where the exit doors were on dual door variants) which was the same length as on the longer models. The third length was 10.9 metres (35'9"), specially produced for Australian operators due to stringent axle weight limits. This used the front section of the 11.3 metre (37') bus and the rear section of the 10.3 metre (33'9") bus. One 10.9 metre (35'9") bus (the prototype) was sold to a Scottish operator (Rennies of Dunfermline) and was fitted out to dual purpose specification for use on express services.

The Leyland National was a simple design: all parts could be replaced. Some operators, like London Transport, bought dual door models, and then later configured some of them to single door. This was helped by the design of the body, the fact that parts were inter-changeable and that the bus was constructed using Avdelok rivets, specially designed for the National, instead of the more usual pop rivets screws or welding.

The earlier vehicles were only available in a limited number of standard colours, e.g. dark red, light red, dark green, to try to match but simplify existing operators' liveries. This just predated the decision by the National Bus Company to standardise on two colours: poppy red and leaf green. The timing was such that several vehicles were delivered in dark red paint to Ribble, who repainted them poppy red before entry into service. At London Transport's insistence, London bus red was added to the colour card, and their fleet eventually amounted to over 500 examples acquired between 1973 and 1980.

In 1978, Leyland brought out a simplified model (10351B/1R) intended to replace the Bristol LH which had been in production since 1967 and was a type popular in NBC companies for rural routes. It was available in a single length (10.3 metres; 33'9") and had a revised interior that had minimal lighting and without the rear roof-mounted heating unit in previous models. Heating was under the seats, and was basic but effective. These vehicles were lighter, and this characteristic and the lower cost helped make extra sales. London Country bought quite a number of these, which other operators snapped up when London Country was broken up.

The National 2 was introduced in 1979. It differed from its predecessor mainly by having a wider choice of engines, along with a new nose moulding giving it a more bulbous look and a grille to cool the new front-mounted radiator, and a revised rear end with new lights and a different engine door.[2][3]

The Mark I Leyland Nationals had an 8.3-litre straight-six turbocharged Leyland 510 headless diesel engine. The Leyland 510 engine had an unusual design, in that it featured non-detachable cylinder heads; any work on the valves required the crankshaft and pistons to be removed to enable access from the cylinder bore. This engine did not prove popular with all operators, being prone to poor fuel consumption and heavy smoke production if not maintained to high standards.

Some operators experimented with a different engine and found they could avoid the 510, which had the reputation of being a high maintenance unit and hard to work on.

Later on a simplified model (10351B/1R) was offered, with an engine that was reduced in power to 150bhp instead of the usual 180bhp setting for the heavier duty version of the National.

The National 2 was powered by initially the 0.680 engine then later the TL11, the Leyland 510 engine no longer being offered.

In 1981, a Gardner 6HLXB engine was experimentally installed in accident-damaged Eastern Counties Omnibus Company National. This paved the way for many engine conversions. Leyland were taken to court by Gardner for not offering their engine as an option in the fast selling National and as a result began to offer the Leyland National 2 with Gardner engines from 1982, initially the 6HLXB and later the 6HLXCT.

The first was delivered in March 1972 to Cumberland Motor Services (ERM35K) and the bus quickly became a common sight on British roads.[4] Although developed for the National Bus Company (whose subsidiaries effectively had to purchase it), it was also bought by the Scottish Bus Group subsidiaries,[5] London Transport,[6] SELNEC[7] and British Airways[8] (which chose the 3 door version) and other operators.

In years to come, with all of the pressures created by deregulation, operators began refurbishing their Nationals for extended service, often retrofitting DAF or Volvo engines.[9][10] The riveted body parts were easily replaced. In some cases a vehicle could be repaired and returned to service on the same day. All new parts were painted with grey primer so operators could paint to their requirements.

A more extreme approach was offered by East Lancashire Coachbuilders with their Greenway, that saw virtually everything other than the frame and axles replaced.[11]

The export version of the Leyland National was constructed in the standard way, although some were what might be called a hybrid, consisting of longer windows up to the rear axle and shorter ones after. This resulted in a 10.9 metre (35'9") bus as opposed to either a 10.3 or 11.3 metre (33'9" or 37') version.

Given the design it was very easy to produce left hand drive vehicles and these were used as a way of generating orders.

However, the Leyland National was not particularly successful in the export market - the largest export order of 450 was to Caracas, Venezuela, in 1975–76. Around 125 Leyland Nationals were shipped to Kingston, Jamaica, between 1972 and 1974 to be operated by the Jamaica Omnibus Service, a subsidiary of the British Electric Traction company. Forty were exported to Trinidad and Tobago for use by the National Bus Company.

Nederlandse Spoorwegen in the Netherlands purchased 25 on behalf of their bus subsidiaries NZH, Westnederland, Centraal Nederland and Zuidooster. Problems with windscreen glare resulted in the windscreens being removed and a different version being fitted.[12]

A preserved Mk1 Series B National, showing the podless roof, front air vents and black light surrounds that were characteristic of this model.

Singapore Bus Services received a single 11.6 metres (38') dual door Leyland National 2 in February 1981 which would mostly work on bus route 143 as SBS6820L until its withdrawal in 1983, after which it was exported to Australia.[14]

In Australia, ACTION purchased 70 Nationals in 1974–75, 16 being fully assembled in England and 54 in Australia. Some were repowered with MAN engines.[15] In 1975, Brisbane City Council purchased seven[16] while the Melbourne & Metropolitan Tramways Board purchased 30.[17]

The Metropolitan Transport Trust purchased 63 in 1975–76 for use in Hobart. These were all 10.3 metre (33'9") units, however one was rejected and its replacement was a 10.9 metre (35'9") unit.[18] Surfside Buslines were the largest Australian private bus operator with a fleet of 38 purchased new and second-hand.[19]

The chassis of the Leyland National was also sold as the Leyland B21 in limited numbers to overseas operators.[20]

As a result of legislation preventing the use of step-entrance buses on normal public bus routes, no Nationals remain in service, the last major operator was Chase Bus Services, Chasetown who sold the operations to Arriva Midlands and ceased operating as a separate entity on 28 April 2007.[23] Notably all but two retained Leyland 510 engines to the end.

One Leyland National was converted by the Manx Department of Education and Children to act as a mobile IT classroom. The Manx Telecomputer Bus was in operation from 1998 to 2020.[24]

Over 100 Leyland Nationals have been preserved.[25] The Workington factory has closed, though part of the building now forms part of a Stobart Group depot. Among these is the very first Leyland National for Midland Red, 101 (HHA 101L) which, preservation by First Midland Red, has recently been purchased by The Green Bus Company for further preservation. 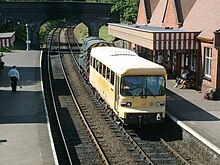 The prototype railbus LEV1, based on the Leyland National at Weybourne station in September 2005

In 1980, some underfloor-engined articulated buses with bodywork derived from the Leyland National were assembled by Charles H Roe.[26][27]

In the 1980s, Leyland National bus components were also used to build the following classes of railbuses for British Rail:

Despite the best intentions, the front end of the Leyland National was not considered substantial enough to allow for a standard bus front end to be used on train carriages. The body was very similar to a National, the components used were identical but the configuration was to a different format.