Convertible sports car manufactured by Italian automaker Siata as a successor to the Daina
This article is about The 208s. For the coupe version of the 208, see Siata 208 CS.
Motor vehicle

The Siata 208S (Sport) is an Italian sports car produced by Siata. Presented in 1952, the 208 Sport wore a lightweight sports spider aluminum body designed by Giovanni Michelotti and built by Rocco Motto.[1] Only 35 208s Spiders were produced, including the two Bertone designed prototypes. It is the roadster counterpart to the Siata 208 CS. 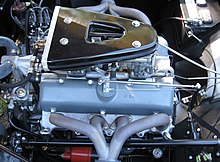