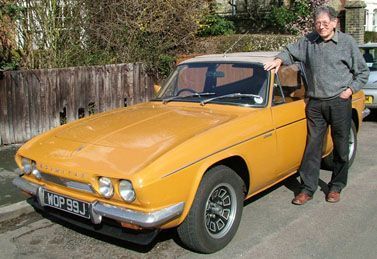 Ogle Design is a British design consultancy company founded in 1954 by David Ogle and based in Letchworth, Hertfordshire.

David Ogle (1922-1962) was known as a very charismatic designer and a great personality. He was educated at Rugby School and briefly studied Law at the University of Oxford. In 1940 he joined the Fleet Air Arm. He flew the Supermarine Seafire in operations in North Africa, the Mediterranean and in the south of France. He rose to the rank of Lt Commander and was awarded the DSC and the MBE.

At the conclusion of the war, he attended the Central School of Art and Design in London, studying industrial design. After working as an industrial designer at Murphy Radios, David Ogle founded his own industrial design company in 1954. Designing the very successful Bush radio TR-82 in 1959 was the start of a new era. In 1960 David decided to branch out into car design and manufacturing, with the four-seater coupé based on Riley 1.5 mechanicals. Only eight Ogle 1.5 where made. More successful was the pretty and revolutionary Ogle SX 1000 coupé produced in the period from 1962 to 1964. The curvaceous GRP body was based on Mini parts.

Ogle also designed the handsome SX250 body based on Daimler SP250. This was shown at the 1962 London Motor Show and impressed British specialist company Reliant so much that this was modified to become the Reliant Scimitar GT Coupé. Ogle then took the Scimitar and created the Triplex GTS estate special made with Triplex heat-absorbing glass. This car, with the registration number 66OGLE, became the property of HRH Prince Philip for a time.

Tragically, in 1962 David Ogle died in a car accident, on his way to Brands Hatch race circuit with an Ogle SX 1000. This ended also the company´s car manufacturing life.

In 1962, Tom was invited to take charge of Ogle Design following the death of David Ogle in a car accident. He was Managing Director and Chief Designer from then until 1999, during which time he was personally responsible for a wide range of innovative products. These included: