The Kia Carens is a compact MPV launched in 1999 by the Korean manufacturer Kia, now in its third generation, and marketed worldwide under various nameplates — prominently as the Kia Rondo.

In 2006, Kia presented a second generation Carens for model year 2007. The Carens/Rondo followed Kia's introduction at the 2005 Frankfurt Motor Show of the Multi-S,[1] essentially the Carens/Rondo in concept form — the S standing for Sporty, Spacious and Smart. The Multi-S differed significantly from the production model, only its inclusion of a dual panel sunroof running the length of the roof.[1]

The name Rondo derives from the musical term Rondo.[2]

Kia debuted the first generation model of Carens, the RS series in May 1999. A facelift was issued in 2002.

The model was discontinued in Australia in 2001, with production continuing elsewhere for the updated model which was launched in 2002.

The second generation Carens, known as the UN series, was launched in 2006. In North America and Australia, the car is called the Rondo and Rondo7 respectively. The Rondo made its public debut at the 2006 Los Angeles International Auto Show, with the 2007 model's North American sales debut in December, 2006 in Canada and early 2007 in the United States. In Australia, sales commenced April 2008.

In the United States, Kia sold more than 20,000 units in each of the first two model years exceeding internal sales goals. Sales rapidly declined in the 2009 model year and never recovered.

Available as a five or optional seven passenger vehicle with either a standard 175 hp 2.4L 4-cylinder engine or an optional 192 hp 2.7L V6 engine in two trim levels. In Australia, it is only available as a seven passenger vehicle with a 2.0L four cylinder engine and a choice of an automatic or manual transmission, depending on trim level. The V6 was Kia's last engine to use a timing belt instead of a timing chain.

As of August 2010, Kia discontinued the Rondo in the United States and continued to market the 2011 facelifted Carens/Rondo in Canada, adopting Kia's new grille. 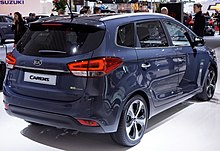 In North America, the third generation Kia Rondo was only available in Canada, due to slow sales in the United States.[8] Sales in Canada ended after the 2017 model year.

In September 2016, the Carens was given a minor facelift with redesigned fascias, wheels and lights, as well as an enlarged "Tiger Nose" grille. The 1.7-liter diesel has been retuned and now produces 104 kW (139 hp) and 340 N⋅m (250 lb⋅ft), while its 6-speed automatic transmission has been swapped to a 7-speed dual-clutch transmission.

In March 2013, Kia Motors collaborated with DreamWorks Animation to cross promote the Carens with the film The Croods.[9]