The Kia Sportage is a compact SUV (classified as a compact crossover SUV since 2004) manufactured by the South Korean manufacturer Kia since 1993. The Sportage slots between the Seltos and the three-row Sorento in Kia's SUV lineup. 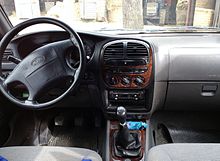 The first-generation Kia Sportage was developed with a Mazda Bongo engineering base platform. It shares many mechanical components such as the engine, transmissions (early versions), and differentials with the Mazda line of vehicles. This was during Kia's alliance with Ford and Mazda, which involved Ford/Mazda providing technology and Kia providing inexpensive manufacturing facilities for Ford.

Early in 1994, an experimental project was attempted between Kia Motors and Daimler-Benz AG. A small number of converted three-door convertibles into two-door pickups, designated GLL200, were produced. Actual production numbers have never been verified, but were rumored to be no more than 25 units assembled. All were test marketed through franchise dealerships in Seoul, South Korea, and Taipei, Taiwan. The collaboration was soon abandoned as Daimler unexpectedly withdrew before a formal agreement was achieved.[citation needed]

From 1995 to 1998, the Sportage was built by Karmann in Germany; European buyers received German-built versions in that period, while the rest of the world received South Korean-built versions. It was launched in Asia in July 1993 and European sales started two years later.

The Sportage was sold in either a five-door SUV or a three-door soft-top convertible. Kia initially developed the wagon in standard length form, but in circa 1996, the company released an extended length version. This stretched model—mainly sold in Asian markets under the name "Sportage Grand", but also as the "Grand Wagon"—featured a 305 mm (12.0 in) longer body utilizing the same wheelbase, an increase in luggage capacity from 1,570 to 2,220 liters (55.4 to 78.4 cu ft), and the relocation of the spare wheel from the tailgate to underneath the floor.[1]

This first-generation model (1993–2002) sold in low numbers, even domestically in South Korea, and models after Hyundai's 1998 partial takeover of Kia (1997–2002) were recalled twice for rear wheels dismounting while driving. The first-generation Sportage was discontinued in South Korea in 2002, and in North America after the 2002 model year. By 2003, most international markets had discontinued the Sportage range, although it remained on sale in some developing countries until its second-generation replacement arrived in 2005.

The Kia Sportage scored the lowest possible result in the Australian ANCAP crash tests – one star out of five. As well as a failure of the seat belts, the vehicle structure collapsed.[3]

After a two-year hiatus, the Sportage returned in model-year 2005, sharing a Hyundai Elantra-based platform with the 2005 Hyundai Tucson. A 2.0 L straight-4 diesel engine was available in the United Kingdom. Pricing started at just over US$16,000. Fans of the original pre-Hyundai Sportage and critics complained that it was considerably larger than the original Sportage and had none of its off-road capability, the two keys to its success. However, buyers of the second-generation model were likely to favor the available 173 hp (129 kW) V6, with 178 lb·ft of torque (241 N·m). Overall fit/finish and quality was noticeably improved over the first-generation model.[citation needed]

A facelift model of the second generation was introduced in May 2008. From 2006, it was manufactured at the Žilina Plant in Slovakia. A second facelift was introduced in the UK in early 2009, only a few months after its first facelift.

The Insurance Institute for Highway Safety displays a 2008 Sportage as an example of a weak roof.

The second-generation Sportage earned a top rating of five stars in crash tests by the National Highway Traffic Safety Administration. However, the Insurance Institute for Highway Safety (IIHS) rated it only “acceptable” for frontal and side impact crash protection and “poor” for roof strength.[8] 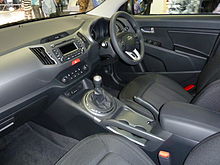 The SL series Sportage was released to Asian and European markets in April 2010, the North and Central American markets in August 2010, and the Australian market in October 2010, for the 2011 model year.[11] Two engines were available, a 2.0-liter Hyundai R diesel engine with 184 hp (137 kW), and a 2.0-liter Theta T-GDI gasoline engine. In China, it was released by Dongfeng Yueda Kia in October 2010 and called the Sportage R, and was to be built and marketed alongside the previous generation rather than as a replacement for it.[12]

The Sportage won the 2011 Car of the Year (originally "Auto roku 2011 na Slovensku") in Slovakia and "Truck of the Year" nomination of International Car of the Year. It was top of the JD Power Survey for 2012, the only car in the survey to score five stars across all categories, from mechanical reliability to ownership costs and the dealer experience. In South Africa, it took the 2013 Standard Bank People's Wheels Award for "SUVs and Crossovers – City & Suburban".[13][14]

The third generation received a facelift for the 2014 model year that included new headlamps and fog lamps.[citation needed]

The third-generation Sportage received a "Top Safety Pick" rating from the Insurance Institute for Highway Safety in the United States.[15] Earning the award became tougher in 2010 when IIHS added the rollover crash test, which measures roof strength and is twice as stringent as the federal requirement. To pass this test, a vehicle's roof must be able to withstand the force of three times the vehicle's weight (acceptable rating). The federal standard requires a roof to hold 1.5 times the vehicle's weight.[16] It also scored the top rating of 5 Stars on the Euro NCAP crash tests[17]

Kia unveiled its newly redesigned Sportage at the Frankfurt Motor Show in September 2015, and brought it to market in 2016 (as a 2017 model in North America). The company said the contrasting sharp edges and smooth surfaces were inspired by modern fighter jets.[19]

In North America, the new Sportage is offered with three trim levels (LX, EX, and SX). Much like the previous model, it is available with two inline-four engine choices, a naturally aspirated 2.4-liter and a turbocharged 2.0-liter. The 2.4-liter produces 181 hp (135 kW) and 175 lb⋅ft (237 N⋅m), while the turbocharged engine makes 240 hp (180 kW) and 260 lb⋅ft (350 N⋅m), with small differences in performance dependent on whether FWD or AWD is configured. Both engines are mated to a six-speed automatic transmission.

The 2017 Sportage received a "Top Safety Pick" rating from the Insurance Institute for Highway Safety.[20]

The Kia KX5 received a facelift in 2019 conducted by Dongfeng Yueda Kia that would exclusively be sold in China only.

Available from March 2019, the front fascia was completely restyled with headlamps integrated with the grille and the rear end of the KX5 was also slightly redesigned for the Chinese market. Despite the exclusively restyled exterior, the wheels of the Chinese version are the same as the ones on the international Kia Sportage facelift.[22]

The fifth-generation Sportage was unveiled on 8 June 2021,[24][25] with specifications revealed in July 2021.[26] Based on the brand’s latest N3 platform architecture, Kia developed two versions of the Sportage with different body length and wheelbase depending on the market.[27]

The vehicle has been equipped with a Terrain Mode that automatically adjusts various settings depending on conditions, including snow, mud, and sand. It also features electric control suspension (ECS) that provides continuous damping control in real-time. Hybrid and plug-in hybrid models will also feature an E-Handling system. lt is also equipped with a more compact shift-by-wire transmission dial for the automatic model. The vehicle has also been equipped with new safety systems such as autonomous emergency braking (AEB), navigation-augmented adaptive cruise control, lane centring assist and advanced blind-spot collision-avoidance assistance system.[28] The North American model will launch in 2022 for the 2023 model year.[29]

The European-spec fifth-generation Sportage was announced in September 2021.[30] It is shorter by length by 135 mm (5.3 in), and shorter in wheelbase by 75 mm (3.0 in) compared to the standard model. Other differences include the deletion of a window on the rear quarter panel, and a modified front fascia.[31]

The long-wheelbase, fifth-generation Sportage for United States and Canada was revealed in October 2021 as a 2023 model year. It is produced in West Point, Georgia instead of imported from South Korea.[33] For the United States comes the same hybrid version from Europe with the same T-GDi engine and a 44.2 kW electric motor combined with a 1.49 kWh battery that also delivers the same 226hp power, It has an estimated autonomy of 805km depending on the version it can be front wheel drive or four wheel drive (AWD versions have a central differential lock)[34]

The Sportage was Kia's best selling model worldwide in 2016, overtaking the Rio.[35]