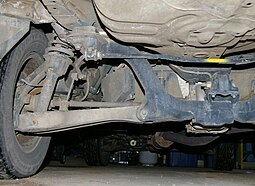 A multi-link type rear independent suspension on an AWD car. The anti-roll bar has some yellow paint on it.

Independent suspension is any automobile suspension system that allows each wheel on the same axle to move vertically (i.e. reacting to a bump on the road) independently of the others. This is contrasted with a beam axle or deDion axle system in which the wheels are linked – movement on one side does not affect the wheel on the other side. "Independent" refers to the motion or path of movement of the wheels or suspension. It is common for the left and right sides of the suspension to be connected with anti-roll bars or other such mechanisms. The anti-roll bar ties the left and right suspension spring rates together but does not tie their motion together.

Independent suspension typically offers better ride quality and handling characteristics, due to lower unsprung weight and the ability of each wheel to address the road undisturbed by activities of the other wheel on the vehicle. Independent suspension requires additional engineering effort and expense in development versus a beam or live axle arrangement. A very complex IRS solution can also result in higher manufacturing costs.

The key reason for lower unsprung weight relative to a live axle design is that, for driven wheels, the differential unit does not form part of the unsprung elements of the suspension system. Instead, it is either bolted directly to the vehicle's chassis or more commonly to a subframe.

The relative movement between the wheels and the differential is achieved through the use of swinging driveshafts connected via universal joints (U joints), analogous to the constant-velocity (CV) joints used in front-wheel-drive vehicles.

Suspension is the only component that separates the driver and/or passenger from the ground. The suspension in a vehicle helps absorb harshness in the road. There are many systems and designs that do this, such as independent suspension.[1]: 1

In automobiles, a double wishbone suspension is an independent suspension design using two (occasionally parallel) wishbone-shaped arms to locate the wheel. Each wishbone or arm has two mounting points to the chassis and one joint at the knuckle. The shock absorber and coil spring mount to the wishbones to control vertical movement. Double wishbone designs allow the engineer to carefully control the motion of the wheel throughout suspension travel, controlling such parameters as camber angle, caster angle, toe pattern, roll center height, scrub radius, scuff[clarification needed] and more.

A multi-link suspension is a type of vehicle suspension design typically used in independent suspensions, using three or more lateral arms, and one or more longitudinal arms. A wider definition considers any independent suspensions having three control links or more multi-link suspensions. These arms do not have to be of equal length, and may be angled away from their "obvious" direction. It was first introduced in the late 1960s on the Mercedes-Benz C111 prototype and put into production later on their W201 and W124 series.

This is the most common, widely used front suspension system in cars today. It is a very simple and effective design that uses a strut-type spring and shock absorber that work as a team that will pivot on a single ball joint. This system was popularized in British Fords in the 1950s, then adopted by BMW (1962) and Porsche (1963). Later, this space-efficient system became widespread with the growing popularity of front-wheel drive.

One problem with this system is that once the spring or the top plate becomes worn, the driver of a car with this system may hear a loud "clonk" noise at full lock (i.e. steering wheel turned to the extreme left or extreme right positions), as the strut's spring jumps back into place. This noise is often confused with CV-joint knock.[citation needed]

Several independent suspension designs have featured transverse leaf springs. Most applications used multi-leaf steel springs, although more recent designs have used fiber reinforced plastic (FRP, typically fibers are fiberglass) springs. In addition to spring type (multi-leaf steel, FRP), a distinction can be drawn between systems where the spring also acts as a locating link and those where the spring only acts as a spring member.

In 1981, General Motors pioneered the use of a FRP plastic transverse leaf spring on the third-generation Corvette. As in the examples above, the spring used a single, central mount which isolated the left and right movements. The FRP spring reduced weight and eliminated the inner leaf friction as compared to the multi-leaf metal spring which was standard on the car.[2]

Rather than centrally mounting the transverse leaf spring and thus isolating the left and right sides of the springs, some manufacturers, starting with Fiat used two widely spaced spring mounts. This was first used on the front of the 1955 Fiat 600 and later at the rear on the Fiat 128. The spring is allowed to pivot inside of the mounts which allows the displacement of the spring on one side to affect the other side. This mechanical communication between the left and right sides of the suspension results in an effect similar to that of an anti-roll bar.[2][3] Chevrolet Corvettes, starting with the 4th generation in 1984 have combined the dual pivot mounts with FRP leaf springs.

The transverse leaf spring is not used as commonly as it was earlier. It is very rare on modern cars, the Corvette and a few Volvo models being examples.[4] In the past it was more widely used in many Triumphs. The Herald, Vitesse, Spitfire, and GT6 all used a rear transverse leaf spring, as well as the 1995-98 Volvo 960/S90/V90 and a rare Swedish sports car incorporating the Volvo 960 rear suspension called the JC Indigo.[1]: 4

Note that this type of suspension should not be confused with earlier, rigid axle applications such as those used on early Ford cars.