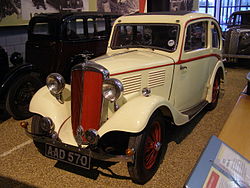 The Standard Ten was a model name given to several small cars produced by the British Standard Motor Company between 1906 and 1961. The name was a reference to the car's fiscal horsepower or tax horsepower, a function of the surface area of the pistons. This system quickly became obsolete as an estimate of the power produced by the engine, but it continued to be relevant as a way to classify cars for tax purposes. Like other manufacturers, Standard continued to use the name to define the approximate size of their 'Ten' model long after the origins of the name had, in Britain, become inapplicable.

An experimental two-cylinder "10" was made in 1906, after which Standard's next car in that category was a four-cylinder 9.5 tax horsepower built between 1914 and 1919. They returned to the 10 tax horsepower market in 1934; this model was replaced in 1937 by a "Flying Ten" that lasted until the outbreak of World War II.

Standard again returned to the 10 tax horsepower market in 1954 with another Ten, which was supplemented in 1957 by an up-market version called the Pennant. The Ten and the Pennant were replaced by the Triumph Herald in 1961.

A 9.5 tax horsepower four-cylinder car was introduced in 1914 and built until 1915. A version of this car, with increases in wheelbase and engine stroke, was offered in 1919.[1]

The Flying Ten was a replacement for the earlier Ten with the semi-streamlined look of the Standard Flying range. The side-valve 1267 cc long stroke (100 mm) engine had a single Zenith carburettor and could produce 33 bhp (25 kW) at 4000 rpm.[3] Drive was to the rear wheels through a 3-speed synchromesh gearbox. The suspension was conventional at first with a solid front axle but this was upgraded to an independent set-up at the front with a transverse leaf spring in 1939. A top speed of around 65 mph (105 km/h) was attainable. Brakes were cable operated using the Bendix system. In early 1941, 150 four-doors were built for the military, after civilian production had ceased.

A sportier version, the Light Flying Ten was also made.

In 1954 the Ten was introduced as a more powerful, better-appointed version of the Standard Eight, with the Eight's Standard SC engine increased in size to 948 cc and sharing a similar frame and transmission. Overdrive (from March 1957) or a temperamental semi-automatic were available as options.

An estate (station wagon) version, the Companion, was launched in June 1955.[8] It was among the first small British estate cars to have rear-passenger doors (like the saloon, and unlike its rivals such as the Ford Squire and Hillman Husky which used the two-door "van" arrangement).

A small number of left-hand-drive Tens were exported to the US and sold as the Triumph TR-10. On these, the two-tone colour arrangement normally reserved for the Pennant was available (though this export model was not tailfinned).

For the United States export market the car was badged as the Triumph 10[7] and in Scandinavia it was sold as the Standard Vanguard Junior. In Australia the Ten was known as the Cadet.[15]

A tail-finned (with optional two-tone paint schemes) version of the Ten, the Standard Pennant was launched in October 1957. Engine power was increased to 37 bhp[9] and an overdrive gearbox was offered as an option. other options included a radio, heater, leather upholstery and clutchless two-pedal control. Indian-produced Pennants were branded as "Standard 10", and lacked any bootlid trim other than the branding.